First; the stock hull and intake grate make for a very fast boat on smooth water. It can stand to hookup better in the rough. All grates tested at this time have detracted from top-end speed without enough payback in the rough water hookup arena. Until we can test all available grates, we will refrain from making judgments at this time.

Second; If we could get the boat to come out-of-the-hole like a bullet, all bets would be off. This was not the case of our test boats as delivered. We noticed that by altering the jetting to get the boat to leave like a bullet, the driveability in the low range was unacceptable for the average recreational rider. One of the first things to catch the eye was the mismatch from the arrester/cleaner bottom plate to the carburetor intake bores. The holes in the plate are cast to match a 44mm/and or the 38 Keihin carburetor, not the 40mm. I know this seems counterintuitive on the suface, but the 38mm carbs have a bigger air horn and match the mounting plate, while the 40mm units on the SL1050 have a smaller air horn. It seems, to make plates just for the SL1050  and 1200 (40mm carbs) would be too costly. Polaris chose not to make a plate specific for the 40 Keihin (the SLTX1050 and the SL900 use this same plate on 38mm carbs) and used a design intended for the 38. The Keihin carburetors and/or the bottom plate seemed to be the problem. Further testing showed that assumption to be well-founded.

The next step was to put the carburetors on the flow bench with this mismatch bottom plate and see how much this 3mm step was messing up the air flow. After a little time on the computer and then the lathe, we made some velocity stack inserts to correct what should have been in the first place. We were quite surprised how well these 40mm devices flowed. Another surprise was that this 3mm reducing step was not hindering flow as much one would think by just looking at it.

Initial tests on the bench was at 28" of water and the high tech velocity stacks were only showing gains of about 1%. A Dyno, let alone the seat-of-the-pants, would be hard-pressed to see any gains with these numbers. Since 28" of vacuum was producing almost 200cfm from one carburetor, we felt this was not "real world" and proceeded to make runs at 8, 15, 25 and 35 inches of water. The 35" run was just to see what was happening at those flow rates.

Still more surprises came during this testing session. Polaris did a good job with the stock arrester/cleaner assembly. We’re not going to run out to buy any aftermarket arresters after seeing the stock ones on the flow bench. If a change to the 44mm Mikuni was showing gains, it was not because the Keihins were choking the engine or that the Mikuni was a superior carburetor. In fact, the Keihin is closer to the way you would want it look as a performance carburetor than the Mikuni. The problem was not in the carburetors. The multiple flow bench tests showed a definite pattern. Anyone with experience in this area would describe it with one word: Turbulence. 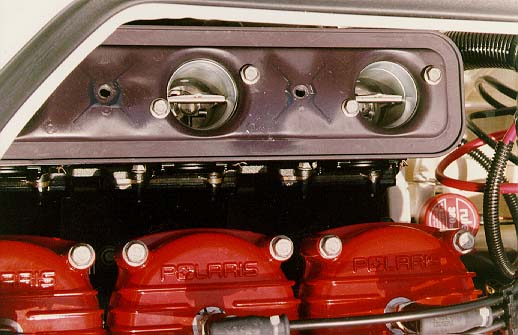 Time to hit the water for the next phase of testing of the LAKO Stealth Stacks in the real world as recorded by our Stalker ATS system using a controlled loop testing scenario. We averaged four runs each with and without the Stealth stacks. The testing backed up what we saw on the bench; most of the gains were in the bottom and mid-range of the speed/time curves, i.e., 0-50 times dropped by almost a second! Mid-range pull was much sharper than before and the top-end speed stayed the same (just got there quicker). This is even more amazing when we reveal that stock jetting was in place! The only change to fuel was to keep the low speed screws at 3/4 turn. At the 3/4 turn setting and the stacks removed, the SL1050 had a bad lean bog off idle, the stacks helped this problem to the point of eliminating it. This is due to the laminar flow achieved over the low speed circuits instead of turbulence. Since these devices are only a benefit to the SL1050, we are now making a short production run.

This new design requires less than five minutes to install and is made from 6061-T6 Aircraft aluminum.

The retail price is $79.95 including shipping and handling for pre-paid orders via check or PayPal.  For Paypal orders email name and address as well as send funds to PayPal account: arshag@lako.com This kit  also includes a tip sheet on tuning tricks for the SL two seater hull.  Special on two to four sets:  $129.95!!